The cold ocean filled our hearts, forever with lim

At the finish line of the adventure race last week

Cold and muddy but who cares: we were *racing* aga

“Powdery snow AND mom trusted me enough to take

Closed out my @biscaycoaching January [at least] 5

>This post has nothing to do with Chinua Achebe’s book, but as I was running yesterday those words kept popping into my head as the theme for the week. I felt overly confident after last week’s workouts, and going into this week I figured I was superhuman and would handle the workouts again just as well. This is my weekly wrapup:

So maybe this is what Ben refers to as metamorphisizing. I know that in order to get stronger, you first need to be broken down. I have one more “build” week, where I will probably hit 95-100 miles, then I get a rest week!! (my massage is already scheduled :)) I would like to say that at least one of these workouts last week was a “strong” one for me, but that wasnt the case. I think the 2 hours would have been okay but I was having stomach problems. The hills were just hard. I made it through 4 of them, but then was supposed to do 20 minutes at marathon pace. I got through like 45 seconds, then just slowed to a jog for 10 minutes and called it quits.

Saturday’s forecast was 90 degrees. Not great news for a long run, but was kind of a blessing in that I can practice in the heat before race day. I had intended to go out to the OD course, but with a weather report like that and a lack of knowledge and comfortability knowing where I could pick up water…..mama didn’t raise no fool. You’re asking for trouble heading into unknown trails in the heat. So, I went out to the AT to do a out and back. Usually, this run takes me about 5 hours. Knowing where the water was, I could just relax and get the miles in. Or so I thought. The trip out went well. There were a good amount of people out hiking on the trail which always makes me happy. I think my favorite groups are the boy scout troops. The boys are mostly afraid to look at me and seem quite nervous about my spandex and sports bra which leaves little the imagination. Meanwhile the dads are pumped to see me and give me encouragement in the form of comments like “You go girl!” (he probably has a daughter) to (as he stares at my legs) “You look….in shape.” (he probably doesn’t have a daughter….). So that makes the time go by. I also got to have a staring contest with this little guy: 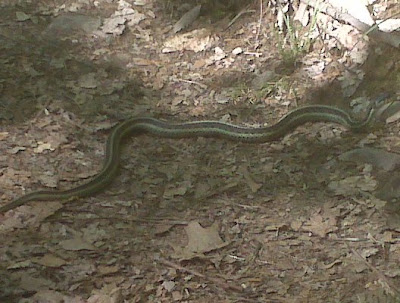 So I made it all the way out in 2:35. Perfect! Right on schedule. I knew my Nathan pack was about 1/2 full, so I thought I was on track with that too. I guess this is about the time of day when it really started to heat up, because climbing up the switchbacks I was downing the water. Then I kept drinking while I was running. And kept drinking. Until finally, I had no water left. My watch indicated that I still had about 25 minutes at least of running to the water stop. Crap! And on a day when I thought I planned it well! I managed to remain calm though, and kept telling myself to just take it easy, I will get there. Eventually I did and basically showered under the water pump when I got to Gathland State Park. It seemed like as soon as I was wet, I was dry again though, so I got some food in me and kept going. I was hurting at this point, but nothing too major, just felt very dry….my black shorts were now caked in white salt too. I got up to my favorite lookout spot here:

and knew I was close to the end. About 1 minute from the car there’s another water pump so I stopped again, and when I stopped this time the heat really hit me. I was dizzy and dry heaving a bit, but I sat for a few minutes before pushing to the car. I knew it was just a matter of getting to the Subway about 5 miles away and getting some food and a coke in me. Unfortunately, my body didn’t want to wait that long and I had to pull off to take care of some sickness on the way. I suppose I was more dehydrated than I thought. Sigh. I will certainly have to work harder at that for OD. But I did make it to Subway and got a footlong chicken bacon ranch and a large coke which hit the spot. All in all, not too bad a run, but a definite reminder than when it’s hot, DRINK!

Alyssa is a professional triathlete who has logged over 8,000 miles in competition of swimming, biking and running across five continents. She came to triathlon from an ultrarunning background and over the last few years has found success back on the trails: in 2018 she set the female supported Fastest Known Time (FKT) on Vermont's 273 mile Long Trail in 5 days, 2 hours and 37 minutes. In 2020 she set the women's supported FKT for climbing the 46 High Peaks in the Adirondacks in 3 days, 16 hours and 16 minutes. She is a triathlon and running coach, and also enjoys spending time guiding hikers out on the trails. Alyssa is based in Charlottesville, VA with her dog Ramona.
View all posts by Alyssa Godesky →