In our element ⛰ #oldragmountain #trailrunning

When I got off the waitlist for the Jarmans Intern

Oh those good old days, when a black bathing suit

>When I was growing up I played soccer in a league that was a few towns over. I can’t even imagine how many times my parents had to cart me from Severna Park to Crofton and beyond for games and practices. Then, after going to Spalding, I befriended a lot of people in the Crofton/Bowie area. Route 3 and I became even better friends. One of the most distinct memories I have of that stretch of road that took me from one side of the world to the other, is a sign that is put up outside one of the developments: If you lived here, you’d be home now.

That sign always irked me, because I was like “whatever, I dont want to live there. I want to be home later because I like that better.”

On Tuesdays now I swim, and it’s a hard day. My main set consists of 100’s repeats (see this old post). Every week it gets harder as the rest gets shorter and the reps get longer. This week I hit #12 and had 3 more to go. I smirked under water as I hit that mark and the only thing that came to mind was “if this was last week, you’d be done now.”

Similarly to how I always felt about that sign on Rt. 3 though, I didn’t want to be done. I wanted to keep going. Because I like it there more. 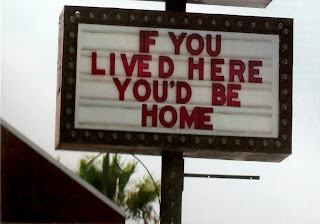